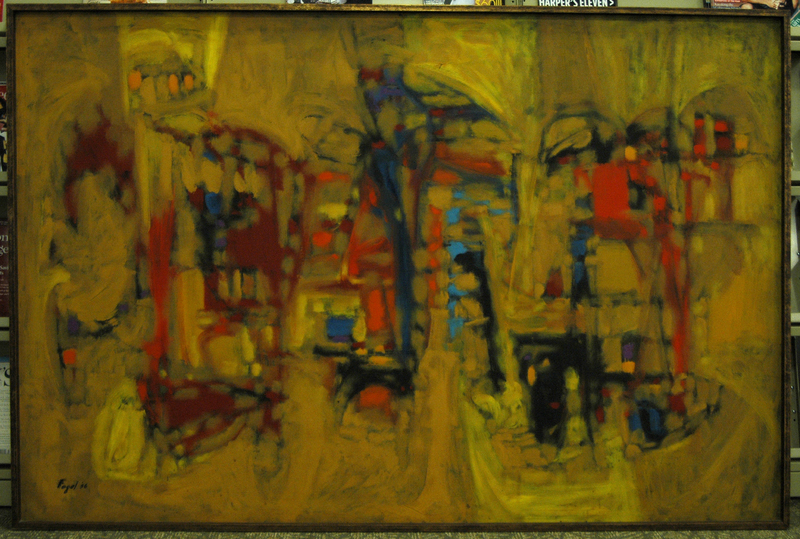 Seymour Fogel was an American artist whose artistic output included social realist art early in the century, abstract art and expressionist art at mid-century, and transcendental art late in the century. His drive to experiment led him to work with expected media – oil paints, watercolors, and acrylics – as well as unconventional media such as glass, plastics, sand, and wax.
By the mid-1930s Fogel was an established member of the New York City art community, and was familiar with artists like Yasuo Kuniyoshi, Alexander Brook, Georg Theo Hartman, Arnold Blanch, Adolf Dehn, Phillip Guston, Ben Shahn, and Rico Lebrun. Ed Walker, the chairman of Millikin University’s art department, noted that Fogel’s “story reads like a ‘who’s who’ in midcentury American art.”
From 1934 to 1941 Fogel was awarded several mural commissions by both the Federal Art Project of the Works Progress Administration (“WPA”) and the Treasury Department's Section of Painting and Sculpture, executing murals in such places as Brooklyn, New York; Safford, Arizona; Cambridge, Minnesota; Washington, D.C. and at the 1939 New York World's Fair. While traveling across the United States in freight trains to complete mural commissions for the Federal government, Fogel produced drawings of ordinary Americans who had been affected by the Great Depression. These social realist works depicted grinding urban poverty, and lynchings in the American South.
In 1946, Fogel moved to Austin, Texas where he accepted a teaching position at The University of Texas at Austin. He became an integral part of the Texas Modernism movement, along with such artists as Kelly Fearing, Lester and Charles Umlauf. In Texas he executed what have been considered the first abstract murals in the state for the American National Bank (1954), which was recognized by Time Magazine as one of the year's most significant achievements in corporate art, the Baptist Student Center at the University of Texas (1949), the First National Bank in Waco (1955), the First Christian Church in Houston (1956) and the Petroleum Club, also in Houston (1950). He pioneered the use of ethyl silicate in his mural commissions.
Fogel converted a rustic 19th century barn in South Austin into a ranch-style house with Usonian influences in 1953. The Seymour and Barbara Fogel House, which Fogel called "Southwind", was listed on the National Register of Historic Places on April 2, 2003, both for its association with Fogel and its unique architecture and construction.
In 1959 Seymour Fogel moved back to New York City where he maintained a studio and established his residence first in Westport and then in Weston, Connecticut. During this time he began to experiment with texturing his paintings with such material as paraffin wax, cloth, wood and sand. In New York he produced transcendentalist art which he referred to as “atavistic.” Mural commissions at this time include the U.S. Federal Building in Fort Worth, Texas (1966), the Hoffman La Roche Corporate Towers in Nutley, New Jersey (1964), Public School 306 in Brooklyn, New York (1967) and the U.S. Federal Customs Building in Foley Square, New York City in 1968. In the latter stage of his mural career, he used mosaic as his primary medium.
In 1974 Seymour Fogel relocated his studio from New York City to his residence in Weston. In this last decade of his life, Fogel focused entirely on atavistic art in a variety of forms: paintings, drawings, collages and both painted and raw wood constructions. Seymour Fogel died on December 4, 1984.
Fogel’s art was exhibited in numerous museums and galleries, including the Whitney Museum of American Art, the Corcoran Gallery of Art, the Telfair Museum of Art, the Greenville County Museum of Art and the Dallas Museum of Art. His work can now be found in numerous museum collections, including the Hirshorn Museum and Sculpture Garden, Washington, DC; National Archives of American Art, Washington DC; the Museum of Fine Arts Houston; Dallas Museum of Art; Whitney Museum of American Art, NY; Amon Carter Museum of Art; Telfair Museum of Art, Savannah, Georgia; Museum of Art and Archaeology, University of Missouri, Columbia, MO; Greenville County Museum of Art, Greenville, SC; Kresge Art Museum, East Lansing, MI; and the Metropolitan Museum of Art, NY.
Fogel generated a prolific and distinctive body of work. John Baur, director emeritus of the Whitney Museum of American Art, noted Seymour Fogel’s art was shown at the Whitney museum many times. Of Fogel, Baur said: “I have learned the only thing one can safely expect in Fogel’s work is the unexpected. Men like Sy have worked in all media, explored all styles, and refused to limit themselves.”
Greta Berman, an art historian and educator at Juilliard College wrote: “Fogel’s endless exploration into self and the eternal world reaches beyond easy definition … revealing a multitude of dimension and meaning that forms the very essence of art.”