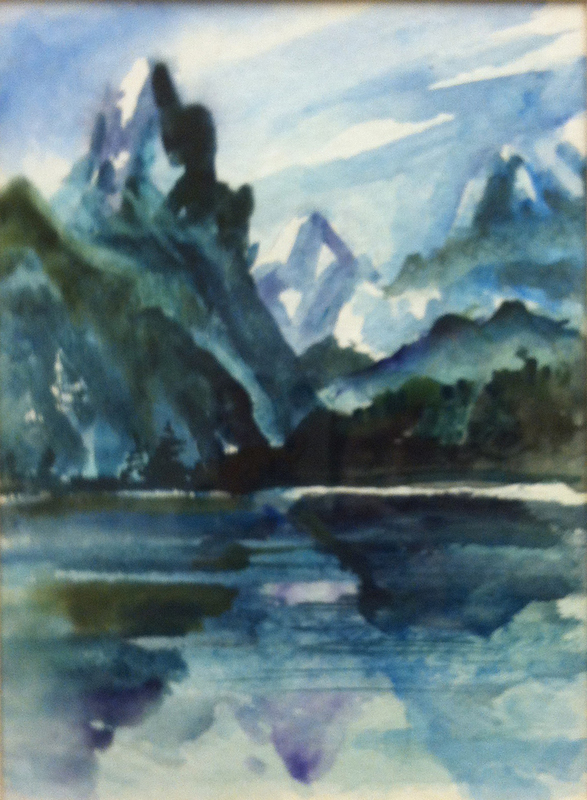 Rebecca (“Becky”) A. Merrilees was born in New York City and raised in Westport, Connecticut. She grew up in an artistic family with, as she would say, “..a pencil in her hand.” Her father, Ralph L. Boyer, was a celebrated artist, creating many large scale murals during the WPA years, and was recognized as an important member of the “Westport School of Art.” Rebecca’s mother, Rebecca Hunt Boyer, was also an accomplished painter. Becky received her art education at the Boothbay Studios Summer School of Art, American School of Design, Pratt Institute (where she later taught some classes in Drawing), and the Skowhegan School of Painting and Sculpture.
Becky was a pioneering commercial and fine artist, as well as a selfdirected, motivated, intelligent, focused person with an inquisitive mind and keen skills of observation. She was the first woman to have a Readers Digest cover in 1961 and went on to have 8 covers, including 2 for foreign language editions. She illustrated several books for the Time Life Golden series, The Guide to Evolution, The Natural Science Encyclopedia, The Field Guide to Trees of North America, and American Antique Glass to name a few.
Becky’s late husband, Douglas Merrilees, was an industrial engineer, instructor, innovative designer, and architect at Pratt Institute and later, Norwich University. He was instrumental in the development of what is now known as the “Made in Vermont” movement. Before that, he was a pioneer in the manufacture and distribution of modular furniture back in Connecticut and New York City.
Becky was well known for her botanical illustrations, but was equally at home with technical schematics and portraits, as well as still life and landscape works. She worked tirelessly for the causes and local organizations she supported and was an unending source of illustrations for the Northfield Historical Society, Brown Public Library, United Church, restaurants, schools and Norwich University. Her work can be seen throughout Washington County, particularly in Northfield.
Becky ran a very popular series of Life Drawing classes in Northfield during the late 1960’s through the mid-1970’s. She also taught Nature Drawing and Sketching at the North Branch Nature Center in Montpelier, as well as Life Drawing Master Workshops and Still Life with Pastels and other Drawing Materials at Studio Place Arts in Barre. In fact, she painted and drew, and organized art exhibitions at Westview Meadows up until very recently. A 75 Year Retrospective Exhibition of her work was held in September at Studio Place Arts, and she had many requests for private art instruction, classes and mentoring.
Becky is survived by her son, David B. Merrilees, of Winooski, Vermont; her granddaughter, Caitlin Clark, of Coram, New York; her great grandson, Cahiel Linton of Islip, New York; her nephews, Ron Slater, of Westport, Connecticut and his family, Steven Slater, of Wolcott, Connecticut; her nieces, Merrilees Leehimus, of Stratford, Connecticut, Judy Kupustis, of Meriden, Connecticut, and Susan Alberto, of Goose Creek, South Carolina, as well as cousins, great nephews and great nieces and many, many friends. Becky was predeceased by her husband, father and mother as noted above.