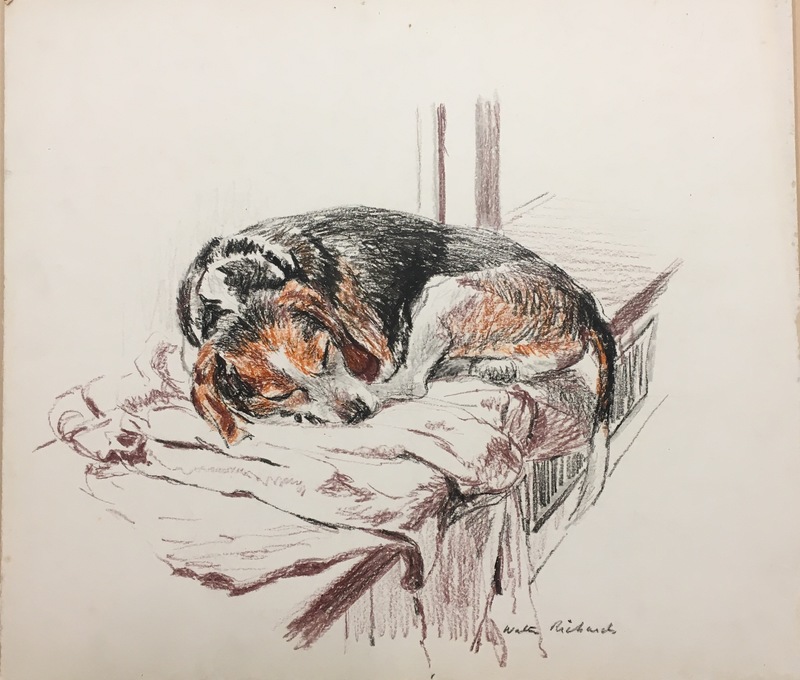 Whether high art should mingle with low art, or high culture with mass culture, seems to be a burning question these days. So the current show at Connecticut Graphic Arts Center in Norwalk is something of a timeout.
The division between these planes is almost erased when it comes to the seven-decades-long career of Walter DuBois Richards, who was a major illustrator during the golden age of advertising and mass circulation magazines, the 1930's through the 60's.
Always alongside his commercial work was his fine art; he was a painter and printmaker as well.
Mr. Richards, who is 92 and lives in New Canaan, was born on a farm in Ohio. His upbringing surely influenced his first linocuts and wood engravings in the early 1930's. From another vivid region he shows industrious people doing what most of us think of as picturesque labor: fishing and trapping lobsters in Maine. These early works are mostly marked by strong, dramatic contrasts of black and white.
And in these early works he shows a special talent for chronicling the different ways water is displaced by sailing craft, as well as the nuances of Maine's shifting weather.
These mundane occurrences continue to interest him, but he has always been congenial with mystery, even eeriness.
The Maine linocuts include a ''Roadside Evangelist'' with no potential converts in sight, and in 1935 he did a series of wood engravings illustrating ''Ethan Frome.'' A lithograph from 1968 becomes a dip into Surrealism: ''The Same Tree Twice'' is worthy of Bunuel.
And it was in Eastport, Me. that Mr. Richards studied with the especially deft lithographer, Stow Wengenroth.
Mr. Richards's lithographs are marked by a sometimes photographic clarity that is not usually associated with this medium. Patience and a light touch to which pressure can be added seem to be the key. If an industry wants anything from its advertisements, it wants its product to be seen as clearly and as detailed as possible, and Mr. Richards's mastery of lithography seems to have fed directly into his successful commercial career.
The first, subtle appearance of an advertisement in the parade, which is not always chronological, is a lithograph from 1950 titled ''Cadillac.'' A black car has stopped before an ornate, columned building in Washington (the Capitol is visible at the far right).
A man in a top hat is getting out; a similarly dressed man comes forward to meet him. This is a sales pitch, but also the makings of an intriguing story.
An obvious advertisement five years later, spotlighting a Ford station wagon, is a reminder of how this show stimulates nostalgia. Viewers might recall that in the 1950's the next year's cars were always unveiled in October, and they were really different from the previous year's.
There are a few incidents of color in the exhibition; the first major one is the watercolor from 1935 titled ''Grandmother's Dresser,'' a basically nostalgic inventory of items. But the most vivid work, both in its content and in its coloration, is an untitled and undated ink illustration probably from the 1940's.
The lack of concrete information about the work matches the elusiveness of its meaning. A suave and dapper man in herringbone tweeds almost leans into a woman whose formal gown has an exaggeratedly plunging neckline. Is this a seduction or a spy story? The table in the foreground is strewn with objects, a wine bottle, what looks like a laboratory beaker, papers, books and a magnifying glass.
Behind the bottle is the statue of a bird, maybe the goofy looking equivalent of the Maltese falcon. This conundrum will keep viewers occupied, but they should realize that it has such a grip because of its clarity.
In the 1930's Mr. Richards reproduced a saucy ''Cuban Postcard'' as a lithograph, but in the 1950's Mr. Richards was an official historian and painter for the Air Force and could be a globe trotter for real. This resulted in subject matter like ''Girl in a Sarong With Sailor.'' But the assignment also often meant a focus on heavy military hardware. A 1954 color illustration that appeared in Colliers magazine, ''Cars on an Assembly Line, Detroit,'' is reminiscent of the early prints that celebrated hard work. This drawing is marked by observation and factory-like precision.
Mr. Richards' powers of invention, however, were never as florid as when he drew a battalion of soldiers invading a nest of spies during the cold war era.
Hung next to this illustration is a man in the process of falling to his knees, an illustration for Argosy magazine called ''Shot.'' Nearby is a large watercolor from 1970 depicting dead game, the kind of subject that might take the artist back to his boyhood on the farm.
During his career, Mr. Richards designed 37 United States postage stamps, and featured in this show are the drawings for the architectural series from the late 1970's and early 80's. It is composed of buildings that span the country's history, from Thomas Jefferson's Rotunda at the University of Virginia to Frank Lloyd Wright's Fallingwater. Mr. Richards didn't stop with the outline and contours of the building; rather his innate sense of drama is present in the judicious play of light and shade that has been a constant.
For all of the action and intrigue that mark the exhibition, the works offering perhaps the most pleasure are vignettes of New Canaan, which he made all through the years since his move there in 1941. These include a commuter scene, ''New Canaan Express, 1905.'' Winter activities are especially lively. God's Acre, a hill in New Canaan that is host to several churches, appears often and in different scenes and times of day. It might be Mr. Richards' equivalent of Monet's cathedral.