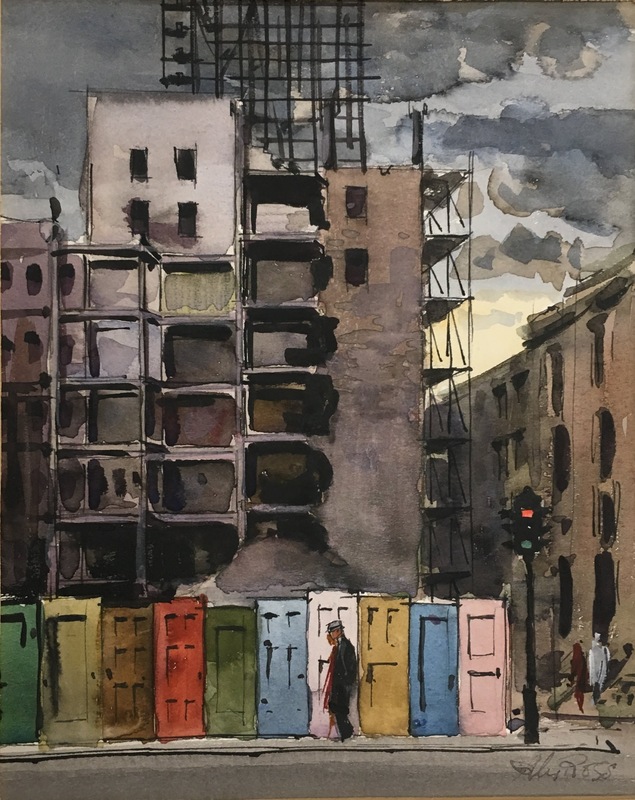 Al Ross, whose droll cartoons featuring married couples, bar habitués, anthropomorphic animals, philosophizing prisoners, art and publishing world denizens, anachronistic mythological figures and loyal Mets fans appeared in The New Yorker for more than 60 years, died on Thursday, March 22, 2012, in the Bronx. He was 100.
Mr. Ross, who was born Abraham Roth, was one of four cartooning brothers who began publishing in the 1930s in magazines like Collier’s, Esquire and The Saturday Evening Post. Two were known as Irving Roir and Salo. The only brother who did not change his name professionally was Ben Roth.
Much of the brothers’ early work was battle-of-the-sexes oriented and aligned with the sexist conventions of the day. One of Mr. Ross’s cartoons shows men at a strip club with their faces turned away from the performer to watch the even more shapely waitress.
“I think the four of them had something to do with the feminist revolt,” David Roth said. “But you know, their inspirations were their wives.”
Mr. Ross, the most successful of the four, was also the best draftsman. A devotee of 20th-century painting and a painter himself — his work was in the Abstract Expressionist mode — he often referred to painters and painting in his cartoons. He had a particular affinity for Picasso’s work — one cartoon shows a figure borrowed from “Guernica,” seemingly drowning, with the caption “Incident off the Spanish coast.”
He had a full-bodied illustrator’s style at the beginning of his cartooning career that became looser, more minimalist and more suggestive. He first appeared in The New Yorker in 1937, and over the years he mastered the wry, arched-eyebrow sensibility of the magazine’s cartoons, and its signature wit, which speaks to an affluent, sophisticated readership and relies partly on erudition, partly on timeliness, partly on psychological astuteness and partly on silliness.
“He was a very talented draftsman who seldom made a preliminary sketch; he’d sit down with a pen and just do it,” said Lee Lorenz, a cartoonist who was the art editor at The New Yorker from 1973 to the 1993. “He valued that spontaneity, which was very much in his character. And he
had very good ideas."
Mr. Ross had a full-bodied illustrator’s style at the beginning of his cartooning career that became looser, more minimalist and more suggestive.
Mr. Ross was born on Oct. 19, 1911. Most sources say he was born in Vienna, but his son David said he was born in Romania and lived in Vienna as a boy.
Mr. Ross was one of five children of Reuben Roth, a military man who served in the cavalry of the kaiser of the Austro-Hungarian Empire. Fleeing the persecution of Jews, Reuben Roth emigrated to the United States after World War I, and the entire family followed, settling in what is now Spanish Harlem in the early 1920s.
Young Abraham dropped out of school in the eighth grade and during the Depression worked as a messenger in the button business. In their 20s, the brothers all studied drawing at the Art Students League. They began cartooning long before that, David Roth said. “They were always carrying on, almost like the Marx brothers,” he said.
Mr. Ross’s books of cartoons included “Sexcapades: The Love Life of the Modern Homo Sapiens,” and he was the author of the guide “Cartooning Fundamentals.” He outlived his brothers and his sister, Ann, who was a bookkeeper. His wife, the former Sylvia Heller, whom he married in 1937, died in 2006. She started the Rothco cartoon agency, an expansion of the cartoon bank that was started by Ben Roth and that established a secondary market for published cartoons.
In addition to David Roth, a painter, Mr. Ross is survived by another son, Arlen, a guitarist; four grandchildren; two step-grandchildren; and four great-grandchildren.