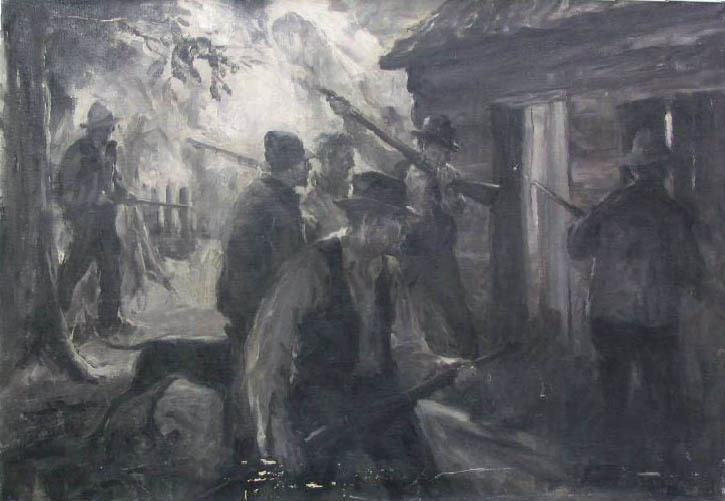 Lealand Roger Gustavson was born March 23, 1899 in Chicago, Illinois. His father, Peter Andrew Gustavson, was born 1869 in Sweden. His mother, Hilda Gustavson, was born 1873 in Sweden. They emigrated to the U.S.A. and became naturalized citizens in 1890. They met and married in Chicago in 1896. They had two children. Their first child, Dell Clifford Gustavson, was born in 1897. The family lived at 1502 Highland Avenue in a house they owned. His father was a wood engraver at the Crescent Engraving Company of Chicago.
After finishing high school in 1917 he worked as a staff artist at the John G. Robel Advertising Company, which was located on the Southeast corner of Dearborn and Harrison.
While he worked as a staff artist he attended night classes at the Chicago Art Academy.
On September 12, 1918 he reported for draft registration. He was recorded to be of medium height, slender build, with gray eyes, light colored hair, and no disabilities. He was not selected for military service.
In 1920 he opened his own advertising studio in Chicago. He drew black and white line art for newspaper advertising.
On June 20, 1923 he married Lucille Peterson. She was born April 7, 1898 in Illinois. Her father was a German immigrant and her mother was from Connecticut. They had no children.
During the 1920s his illustrations appeared in Chicago-based magazines and The Chicago Tribune, as well as Liberty Magazine.
By 1931 the Great Depression had devastated the advertising industry, so he closed his studio and moved to the East Coast to pursue a freelance career in the NYC publishing market. He drew black and white illustrations for pulp magazines, such as Blue Book, Thrilling Adventures, and Triple-X.
He and his wife moved to Westport, Connecticut, where they lived at 4 Violet Lane, a private dead end street off Myrtle Avenue. He used a portion of the house as his art studio. He commuted one-hour south to Grand Central Station in mid-town Manhattan to sell work to New York City publishers.
He studied with Harvey Dunn at The Grand Central School of Art, which was located on the sky-lighted top level of the historic landmark NYC train station. Harvey Dunn's other notable students included Norman Saunders, John Clymer, and Ernest Chiriacka.
He later illustrated stories for Woman's World, Boy's Life, Colliers, The Farmer's Wife, Liberty, McCall's, The Saturday Evening Post, Scribner's Magazine. He was a member of the New York Society of Illustrators.
During the 1930s he illustrated several books, such as The Forest of Lost Men, Once A Pilot, The Tribe of the Tiger, Musketeers Weekend, and Warriors in Exile.
During WWII he moved to 25 Clinton Avenue in Westport.
In 1954 he illustrated the book How To Play Your Best Golf by Tommy Armour. The artist was an excellent golfer. He explained that, "eventually, either by choice, economic pressure, or convenient timing, many artists concentrate on a particular subject which they know a great deal about and are able to interpret with precision and meaning. In my own case, that specialty is painting golf subjects. I have been intimately associated with golf since I was a caddie at the age of twelve and have since won five club championships."
By 1960 he and his wife lived on Kettle Creek Road in Westport.
Lealand R. Gustavson died after a short illness at the age of sixty-seven in the Westport Manor Convalescent Home on July 20, 1966.