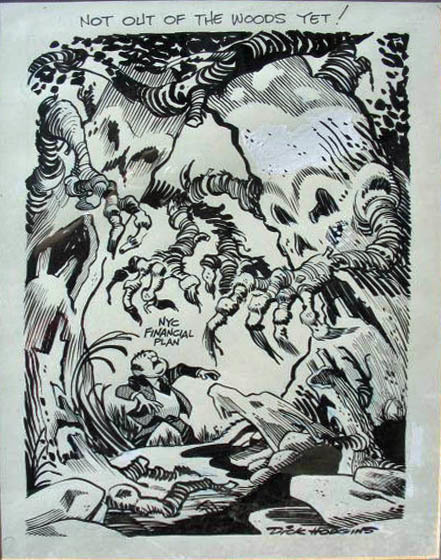 Not Out of the Woods Yet!

Not Out of the Woods Yet!

Henry, Hagar the Horrible and Half Hitch shed tears today when they learned their father, Richard Hodgins Jr., the man who brought them to life with pen and ink at his drawing board, died Sunday. He was 84, and he loved life.
That’s how syndicated comic strip artist and editorial cartoonist Dick Hodgins Jr. said he wanted his obituary to begin when he called this writer in early March to say he had inoperable lung cancer.
Hodgins died at his Wilton home from complications caused by cancer treatments, according to his son Richard Hodgins III.
Dick, as he was known, was one of the last of a winnowing cadre of Fairfield County-based cartoonists who daily kept the funny papers filled with gags.
Their ranks had included the late Leonard Starr who drew “Annie,” “Blondie” artist Stan Drake, and “Hagar the Horrible” creator Dik Browne who upon his death bequeathed the drawing of the loveable Viking marauder to Hodgins.
It was a group of artists, who while working in isolation, met regularly to laugh over drinks at the now closed Mario’s Place at the Saugatuck train station, the shuttered Max’s Art Supplies, and for their formal dinners, the now closed Cobbs Mill Inn.
“Great lunches filled with shop-talk, ribald humor and simply good times,” Hodgins said.
Hodgins’ joie de vivre was contagious, even on his deathbed where he and this writer, friends since the 1970s, spent a good part of Friday laughing about the newsroom people we knew in the late 1970s, the drinking, the irreverence, and the deadlines.
Even in his last days, he was still the rascal, loving his craft as a cartoonist, fancying himself a charmer of the ladies and jocular to the end.
But there was enough of a serious side to Hodgins to make him a powerful editorial cartoonist for the New York Daily News in the 1970s. Editorial cartoons he did about the Son of Sam murders gripping New York City were among his most powerful. He left the News in 1979, and showed up in Norwalk with his portfolio at Fairpress, a Gannett newspaper.
Following high school, he attended night the Cartoonists and Illustrators School, now the School of Visual Arts, in New York City “while working days producing art for educational slide films and television commercials,” said his son.
An Army hitch as corporal during the Korean Conflict had him editing and drawing for a base newspaper in Osaka, Japan and contributing to Pacific Stars and Stripes.
Upon his discharge, he married his sweetheart Joan Coyle after a nine-year courtship and continued illustration for educational films, said his son.
Hodgins later joined The Associated Press, illustrating feature stories, and it was there that he developed a lasting friendship with the late columnist Hugh Mulligan, who lived in Ridgefield.
At the AP, Hodgins’ work caught the eye of Hank Ketcham, creator of “Dennis the Menace,” who asked him to draw his second comic strip “Half Hitch” for King Features Syndicate, a job Hodgins held from 1970 to 1975.
After that job, he worked as the New York Daily News’ editorial cartoonist for 13 years before leaving in 1979 to work in Connecticut.
Simultaneously Hodgins worked on the daily “Henry” comic between 1983 and 1995, and in 1995 began inking “Hagar the Horrible.” Since he took ill in November, his son Richard had been drawing the Sunday “Hagar.”
He was predeceased by his wife Joan, who died in 1986 after a long battle with cancer. In addition to his son Richard, he is survived by son Jonathan, his wife Victoria and granddaughter Neena of West Haven.
Arrangements will be private, his son said, with the future interment of his urn next to where his wife is buried at Hillside Cemetery in Wilton. His son also said as per his father’s wishes that there would be no memorial service.
“Just raise your glass to him, a little toast to the man,” he said. “That’s all he wanted.”

Dick Hodgins, “Not Out of the Woods Yet!,” Westport Public Schools Digital Collections, accessed August 8, 2022, https://collections.westportps.org/items/show/230.