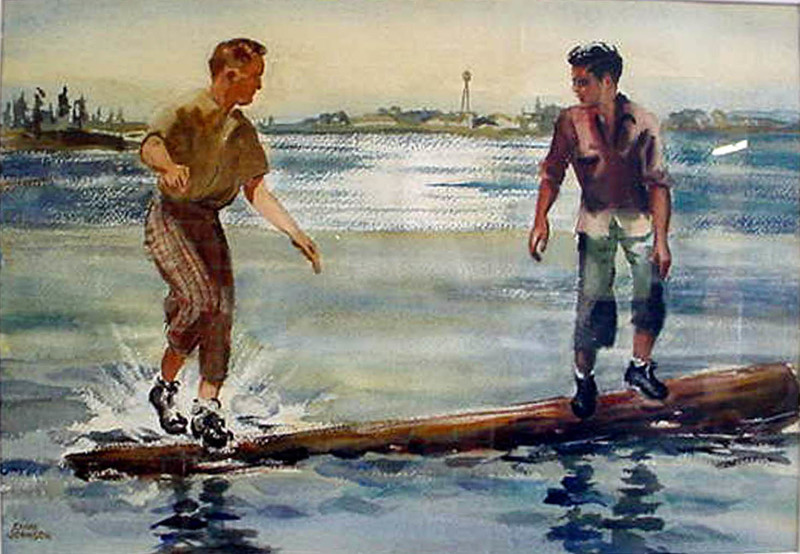 Cecile Ryden Johnson was a twentieth-century American watercolorist who embraced the “plein air” tradition of artists who left their studios for the “open air” and painted in natural settings directly from nature. With her transparent watercolors, action sketches and oils, Johnson gained worldwide recognition for capturing the unique beauty and feeling of natural color, light and shade of locations around the world and as a painter of sports and winter Olympic events.
Cecile Johnson’s paintings reflect a spontaneous joy of life and are prized by collectors for their luminous qualities, sense of immediacy, power and intensity. A review of an exhibit on the Champs Elysee in Paris described her painting:
“She captures the atmosphere and sparkling light of the out-of-doors and recreates it in her watercolors.”
Cecile Johnson studied at the American Academy of Art, Chicago; School of the Art Institute; Macalaster College; Augustana College; University of Colorado; University of Wisconsin; Pennsylvania Academy of Fine Arts; and at Scripps College, Claremont, California.
From the late 1950’s she expanded her painting internationally, ultimately painting throughout Europe, East Africa, Southeast Asia, Japan, South America, the Middle East and especially the Caribbean. An around the world journey in 1959, she demonstrated her consummate ability to capture the essence of almost any location, resulting in an extraordinary series of paintings of such diverse places as the back country of Kenya and Indonesia and on the streets of Bangkok, Tokyo and Hong Kong. She painted extensively in European Italy, France, Germany and Scandinavia where she captured the essence of some of the world’s great cities.
From the 1970’s, her New York studio was in a large, naturally lit loft in the famed Hotel des Artistes adjacent to Central Park. She continued to travel and paint around the world, always ready to leave on a commission, often in the company of her husband, Philip Johnson. Her paintings, her willingness to travel and her ability to capture the essence of the most exotic location placed her in high demand.
Cecile Johnson received numerous commissions from publications and from corporations to capture the American and international landscapes, beginning with an early commission from Ford Motor Company in the 1950’s for American scenes for covers and feature articles in the Ford Times magazine.
Cecile Johnson’s willingness to paint in unusual circumstances found her breaking many barriers: she was the first woman to be selected by the then all male Salmagundi Club in New York and was commissioned by the U.S. Navy as a combat artist to paint the activities of WAVES, Women Marines and Navy Nurse Corp.
Cecile Johnson loved the outdoors and she loved sports. This love and her consummate skill at capturing action live at sporting events led to a variety of commissions to paint on camera from ABC Wide World of Sports, Canadian Broadcasting, the BBC, CNN and other television networks. ABC and CBC broadcast her painting in action at five Winter Olympic games, including the men’s and women’s Gold Medal rounds in figure skating as well as the famous Olympic hockey game between the USA and the USSR, and at many world skating championships (Innsbruck, Austria; Sapporo, Japan; Lake Placid, New York; Squaw Valley, California; and Lillehammer, Norway.) The New York Times described her work as:
“...fresh, realistic work, technically excellent and truly professional. Her ability with color, atmosphere and mood are outstanding.”
Known as “America’s foremost ski artist,” the USOC Fine Arts committee selected Cecile Johnson to produce the official lithographs for the Lake Placid Winter Olympics, and the design of the official lapel pin. In anticipation of the 1992 French Winter Olympics, officials from the Savoie area of France came to her studio at Des Artistes in New York to invite her to depict the Winter Games there. In March 1993 she covered World Cup events in Lillehammer, Norway alongside film crews from CBS to paint in advance of the 1994 Olympics.
“Fresh, accurate painting, plus an emotional and muscular kinship with sports,” are major components of Cecile Johnson’s art. Whether it is skiers or swimmers, she has painted them on site. She is known for action figures. From a Utah gallery:
“With the artist’s deft touch, scene after scene comes alive...These action shots are caught, freeze-framed yet lively with their fluid brushstroke. A kaleidoscope of color sharpened by the paper’s whiteness, breathes even more energy into the paintings.”
Cecile Johnson was highly active and engaged in her professional career as a teacher and member of various associations. She was elected to the board of the American Watercolor Society and to the Board of Trustees of the National Art Museum of Sport. She was also active in the National Arts Club, National Art Director’s League, the Society of Illustrators and the Salmagundi Club.
She took classes of students to paint on location in the plein air tradition; wrote about watercolor techniques, and created a widely-distributed film on watercolor techniques, “Creating with Watercolor”.
Her last years were spent in Washington DC, living with her daughter, Pamela, in their Georgetown home. Cecile Johnson passed away in 2010 surrounded by her family.