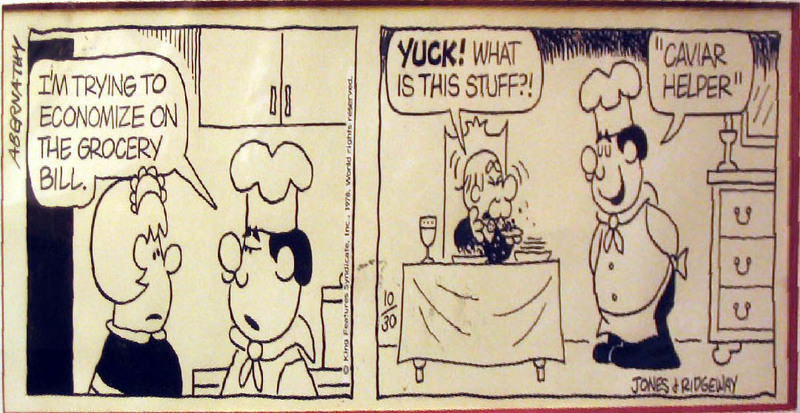 Alexander Ralston “Bud” Jones Jr. of Weston, died in Douglasville, GA, on February 18, 2014, after a long illness. Born in Salem, Ohio, he was the son of the late Alexander Ralston “Bus” and Alice Jones.
A letterman in football and basketball at Euclid Shore High School, he served in the United States Navy before attending Kenyon College in Gambier, Ohio.
Following a brief period working at an advertising art studio in Cleveland, Ohio, he moved to New York City to attend the Cartoonist and Illustrators School and began selling cartoons as a freelance cartoonist to national magazines such as The New Yorker and The Saturday Evening Post.
In 1957, Bud partnered with Frank Ridgeway to create the comic strip “Mr. Abernathy,” which was distributed by King Features Syndicate and ran for 30 years. During his time drawing “Mr. Abernathy,” Bud met and developed a deep friendship with Dik Browne, creator of the syndicated comic strip “Hagar the Horrible.” Over the next several years Bud began writing for “Hagar the Horrible” and in 1993 became the sole writer. He continued writing for the comic strip, which is seen in nearly 2,000 newspapers and in over 50 countries, until his recent death.
Mr. Jones and his family lived in Weston for many years, with all four of his boys attending Weston’s school system. He spent time as the President of the Booster Club and was a fixture at high school football, soccer, basketball and baseball games proudly watching his sons compete for Weston’s varsity teams.
Following his years in Weston, Mr. Jones split time between Naples, FL, and Meredith, NH, enjoying boating on Lake Winnepesaukee in Meredith and golfing at the Vanderbilt Country Club in Florida.
He was predeceased by Dolores, his wife of 60 happy years, and is survived by sons Chip and his wife Joanne of Douglasville, GA.; Jeff and his wife Sara of Torrington, CT; Chris and his wife Jennifer of Redding, CT; and Doug and his wife Roberta of Madison, CT. He is also survived by seven grandchildren: Jennifer, Jeffrey Jr., Alexander Ralston IV, Alexandra, Christopher, Emily and Douglas; along with two great-grandchildren, Anilyse and Jeffrey A. III. Mr. Jones is also survived by his life-long friend and brother-in-law Charles Hill of Euclid, OH, in addition to eight nieces and nephews.
His family said that Mr. Jones was the ultimate competitor, continuing to shoot golf rounds in the 80s well into his 80s, and was the consummate family-man. His sense of humor was unmatched and will be greatly missed by those who knew him as well as the millions more that he made laugh every day through his comic writing.