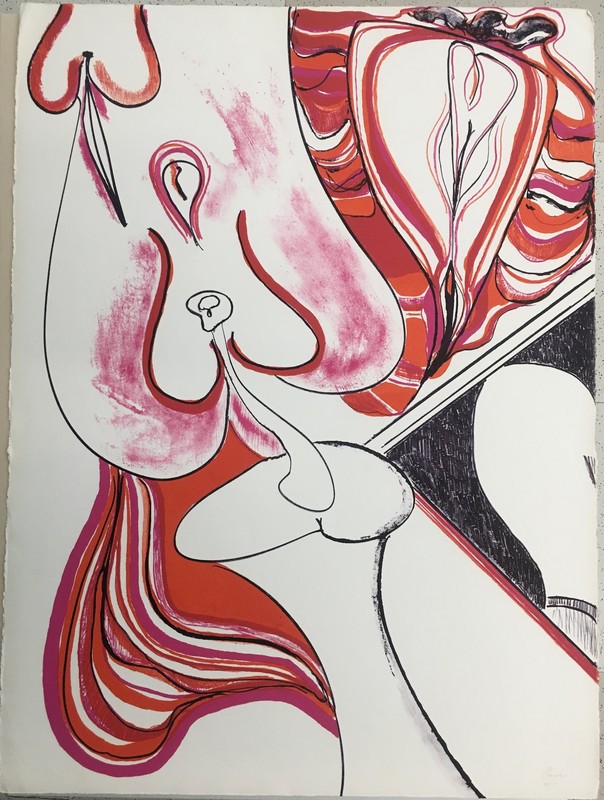 Felix Ruvolo was born in New York City in 1912, but raised in the home of his grandparents in Sicily where he first studied with an Italian artist. At age 12, he returned to the home of his parents, who soon moved to Chicago. They were aware of his intense interest in art and had him continue studies with a local artist and then at the Chicago Art Institute. By 1938 he was exhibiting regularly and was accorded his first invitation to participate in an American Federation of Arts traveling exhibition. Invitations to exhibitions at other major institutions followed--the Whitney Museum of American Art, the Metropolitan Museum of Art, the Brooklyn Museum, the Corcoran Gallery of Art, the Carnegie Institute, the Phillips Gallery Museum, the Pennsylvania Academy, the Walker Art Center, the “Contemporary American Painting” surveys at the Krannert Museum from 1948 to 1961, the Sao Paulo Biennials in Brazil, the Galerie Creuse in Paris. He was represented in the ground-breaking exhibition at the Museum of Modern Art in New York in 1951, “Abstract Painting and Sculpture in America.” His many one-man shows included those at the Durand Ruel Gallery, the Catherine Viviano Gallery, the Grand Central, the Poindexter Gallery in New York and the University of Southern California. His works entered public and private collections such as the Chicago Art Institute, the Krannert Museum, the Walker Art Center, the Oakland Museum of Art, and the Aukland City Museum in New Zealand. His work was reproduced in national magazines and in anthologies published by the Museum of Modern Art, the Whitney Museum, and Albright Museum in New York, the Los Angeles County Museum, the American Encyclopedia, the Dictionaire de la Peinture Abstraite, and Il Giornale D'Italia.
His teaching career began at the Art Institute of Chicago in 1945 and continued until 1948 when he moved with his wife Mardi to New York. Mills College in Oakland had established a program of bringing distinguished artists, such as Fernand Leger, to the campus as guest instructors. Felix was invited for the summer session of 1948; during that sojourn, he had solo exhibitions in the Mills College Art Gallery and at the De Young Museum in San Francisco. At that time he met many Bay Area artists who were to become life-long friends of the Ruvolos.
His national reputation had been firmly established, when in 1949 Felix was extended the invitation for appointment to the faculty on the Berkeley campus. He accepted, but intended to leave the Chicago-New York scene for just one year. He began teaching here in the fall of 1950 after having driven across the country with Mardin in a classic Ford, a woody station wagon, with their dog, a red Irish setter, in the back seat. They first settled in Walnut Creek, which was then largely a pleasant, rural area. They liked it. The idea of a one-year sojourn faded. Their son, Antonio, was born. More and more people moved into the area, it became suburban. The roads were still two-lane and the commute became unbearable. They moved into Berkeley.
The first house in Berkeley was on Hearst below Shattuck, an ancient Victorian, walking distance from Spreckels Hall, the “art building” near present Wurster Hall. In the rear of the property was a large barn-like structure which became Felix's studio. The floor was soon covered with paint cans as he went to work producing a series of large canvases, painting with broad strokes in a heavy impasto. His earlier works were referential, often on fantasy themes. These new paintings were non-objective in idiom, rich in color, line and texture. They were marvelous, they were beautiful, they bespoke his creative genius. Critics came, collectors came, colleagues came, students came, friends from the East came. Artists were invited to serve as visiting faculty. George McNeil, then Director of the Pratt Institute, said that he accepted an invitation to come to Berkeley because Felix was there. The Ruvolo home became famous for its hospitality and its cuisine. Christmas was particularly festive when they served a traditional Sicilian dinner of squid in wine sauce.
They discovered an attractive, modern house in the Oakland-Berkeley hills. Their son had completed a doctorate in anthropology and together they assembled an invaluable ethnic art collection, certainly one of the finest anywhere. Works from every part of the globe were displayed throughout the home. Then, on Sunday morning, October 20, 1991, a tremendous wind blew over the hills bringing a catastrophic fire. Felix later told a friend, “I stepped out of my house and saw a wall of fire coming down the road.” Their car was being repaired, they had only to save a few personal items before their neighbor, Adelie Bischoff, got them into her small car--one of the last to leave the stricken area. They accepted their great loss with courage and stoicism. They found another beautiful home in Marin County, in an area of Sausalito overlooking the bay, not unlike the Amalfi coast. He set up an easel and prepared to paint and to draw again. These plans were frustrated by the onslaught of cancer. Felix passed away on October 10, 1992. He is survived by Mardi, his wife of 45 years; their son, Antonio; and daughter-in-law, Gabrelle. Felix remains a vivid memory for all those here, in the east, and in Europe who knew him as an affectionate friend, a respected teacher and an artist who so greatly enriched their lives and their futures. Among his students who have achieved distinction in the profession are: Wayne Anderson, Walter de Maria, Mark di Suvero, William Brown, Mary Snowden, Paul Wonner, Fred Martin, Ray Saunders, and Barbara Rogers.