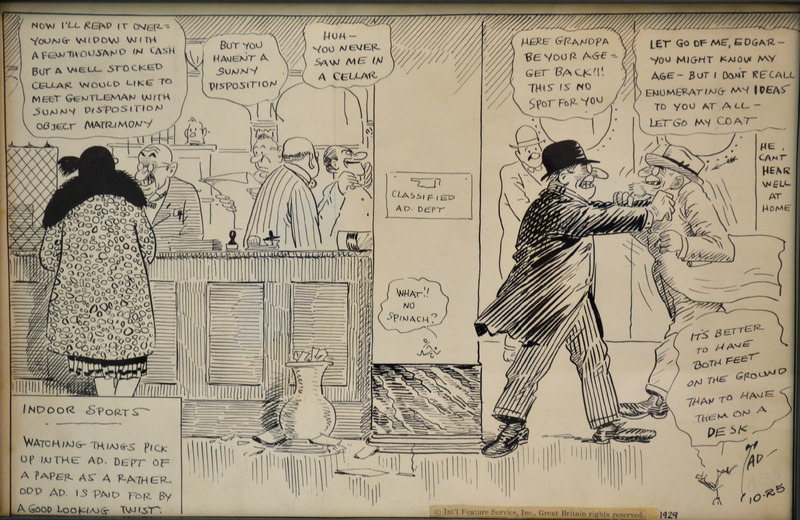 Thomas Aloysius Dorgan, also known as Tad Dorgan, was an American cartoonist who signed his drawings as Tad. He is known for his cartoon panel Indoor Sports and the many words and expressions he added to the language.
Dorgan was born in San Francisco, one of at least 11 children—six sons and five daughters – of Thomas J. and Anna Dorgan. His brother John L. "Ike" Dorgan (born April 1879) was publicity manager for the Madison Square Garden, and his brother Richard W. "Dick" Dorgan (born September 1892) was an illustrator and cartoonist.
Polytechnic High School teachers Rosey Murdoch and Maria Van Vieck recognized and encouraged Tad's talent as an artist. When he was 13 years old, he lost the last three fingers of his right hand in an accident with a factory machine. He took up drawing for therapy. A year later at the age of 14 he joined the art staff of the San Francisco Bulletin.
He created his first comic strip, Johnny Wise, for the San Francisco Chronicle in 1902. By 1905 he was working in New York City at the New York Journal as a sports writer and cartoonist. Jack Dempsey described him as "the greatest authority on boxing."
In addition to his work as a sports journalist, Dorgan did a humor feature, "Daffydills". His dog cartoons, including Judge Rummy, evolved into the strip Silk Hat Harry's Divorce Suit. This was accompanied by a one-panel gag series called Indoor Sports which became his main feature, along with an occasional Outdoor Sports.
Dorgan is generally credited with either creating or popularizing such words and expressions as "dumbbell" (a stupid person); "for crying out loud" (an exclamation of astonishment); "cat's meow" and "cat's pajamas" (as superlatives); "applesauce" (nonsense); "cheaters" (eyeglasses); "skimmer" (a hat); "hard-boiled" (tough and unsentimental); "drugstore cowboy" (loafers or ladies' men); "nickel-nurser" (a miser); "as busy as a one-armed paperhanger" (overworked); and "Yes, we have no bananas," which was turned into a popular song.
In the New York Times obituary, he was bracketed with George Ade and Ring Lardner as a popularizer of "a new slang vernacular." His obituary also credited him as the originator of "Twenty-three, Skidoo," "solid ivory," "Dumb Dora," "finale hopper," "Benny" for hat, and "dogs'" for shoes. W. J. Funk, of the Funk and Wagnall's dictionary company, placed Dorgan at the top of the list of the ten "most fecund makers of American slang."
Dorgan was erroneously credited with coining the usage of the phrase "hot dog" in reference to sausage (see "Hot dog: Etymology").
Tad Dorgan and his wife, Izole M., lived in a Great Neck, New York house valued at $75,000. They had no children, but they raised two Chinese children to adulthood. Dorgan retired from attending sporting events in the early 1920s because of poor health, and a heart ailment kept him at home for the last eight years of his life, but he continued to produce sports comics for Hearst until his death. He died in Great Neck of heart disease, hastened by pneumonia. Hearst newspapers announced his passing in front-page headlines and some of his cartoons were reprinted for a short time. Izole Dorgan, a writer before she married, was the vice-president of the National Doll and Toy Collectors Club. After Tad's death, she started a successful business manufacturing doll furniture.
Dorgan's first book collection was Daffydills, published by Cupples & Leon in 1911. This was followed by several Indoor Sports collections.
Tad Dorgan was inducted into the International Boxing Hall of Fame in 2007 in the category of "Observer"; that is, print and media journalists, publishers, writers, historians, photographers, and artists.